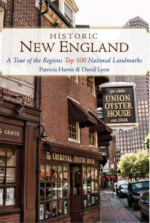 National Historic Landmarks are touchstones of our collective past that still resonate with our present. The six New England states have nearly 400 such places. However, important doesn't always translate into interesting, and so we have Historic New England: A Tour of the Region’s Top 100 National Historic Landmarks––those with the most intriguing and rewarding history. In addition to historic houses and tall ships, Historic New England examines such quirky spots as the country's oldest weather stations, carousels, and sandy beaches. From Fairfield, Connecticut’s Birdcraft Sanctuary to the Windjammers of Rockland, Maine, this book appeals to the historical enthusiast, the armchair traveler, and both local visitors and tourists alike.

Patricia Harris and David Lyon are authors of more than thirty books on travel, food, and art, including Boston, Massachusetts, Rhode Island, and Vermont & New Hampshire in the Food Lovers series published by the Globe Pequot Press. They live in Cambridge, Massachusetts, not far from the Longfellow House, and can be found online at HungryTravelers.com or on social media by the Twitter and Instagram handle of @hungrytravelers.